Conditions that Hyperbaric Therapy Can Treat 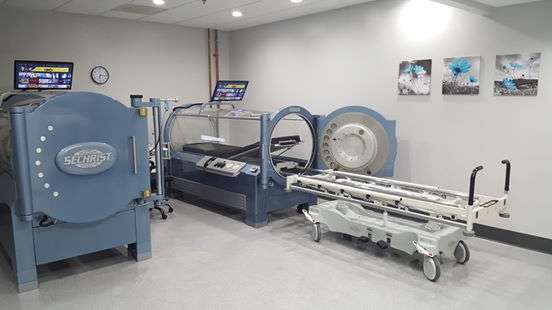 How do you know if hyperbaric therapy is right for you? Oxygenation under pressure, besides the obvious benefits of delivering oxygen, also stimulates the immune system, accelerates your body’s injury recovery mechanism, and blocks the cytotoxic effect of some dangerous toxins. Internationally used indications include but are not limited to:

Additional Medicare-approved conditions for hyperbaric treatment include, but are not limited to:

Pumping oxygen through your circulatory and pulmonary systems systematically heals your injured body and brain. Take a look at the benefits you are likely to experience after just one session:

21 Reasons Why To Use Hyperbaric Oxygen Therapy

Local vasodilation (when blood vessels in the body become wider) following damage to tissue increases blood flow and together with an increase in vascular permeability (the movement of fluids and molecules in and out of blood vessels), increases extravascular (outside blood vessels) proteins, fluid and produces swelling. This swelling contributes to the pain felt. As the oxygen supply reduces, blood flow increases which will only serve to exacerbate the swelling following injury and impede the inflammatory process that assists the commencement of healing. Hyperbaric oxygen therapy reduces vascular vasodilation and permeability by increasing the oxygen content within the blood.

The development of oedema (accumulation of excess lymph fluid) and swelling is caused by a number of factors such as an increase in local blood flow and also damage to local blood and lymphatic vessels. The pressure exerted by swelling and oedema on surrounding structures can compromise circulation. When this pressure in the surrounding tissues approaches or exceeds that in the blood vessels, then blood flow will slow or cease altogether. Oedema and swelling also contribute to tissue hypoxia (a shortage of oxygen in the body) by increasing the distance between the capillary (smallest blood vessels) and the cells, which impedes cell function, metabolism and the inflammatory process by increasing the diffusion (movement of particles from an area of high concentration to an area of low concentration) distance. Hyperbaric oxygen therapy is able to combat the increased distance for oxygen diffusion from blood vessel to cells by increasing the oxygen content within the blood which will result in an increased oxygen delivery to cells and tissues forced further away from the blood vessels due to swelling and oedema, shortening the inflammatory process, thereby speeding the healing and repair of tissues.

The bodies initial response to any injury involves inflammation and attempted repair. Inflammation is the process by which cells such as phagocytes (white blood cells) gain access to the damaged/injured tissues and cells in order to prevent infection and enable healing to commence. Decreased oxygen supply impacts greatly upon the inflammatory process as the cells involved in inflammation are oxygen dependent. Should oxygen supply be decreased, this will greatly impair and slow the inflammatory process and healing. Increased oxygen availability promotes vasoconstriction (when blood vessels in the body become thinner) and this causes tissue fluid reabsorption and helps reduce oedema and swelling whilst keeping the tissue well oxygenated due to the high oxygen content within the blood. Hence supporting the cells of the inflammatory process to remove cell debris and micro-organisms impeding infection.

Following hyperbaric oxygen therapy, range of motion is improved and returned more rapidly as the inflammatory process is accelerated. Swelling and oedema are also decreased and resolved more rapidly. As a result, pain will be less allowing for the return of range of motion as the healing process gains momentum.

5. HBOT increases the production of collagen

Following the initial healing process of the inflammatory response and the prevention or removal of infection, comes the next chapter in tissue/wound healing. Collagen is the connective tissue developed and laid down by fibroblasts, the repair cells of the body. Collagen acts as a base layer in the healing wound and assists the wound to close and repair. The formation of collagen and hence wound healing/recovery is highly dependent on the presence of adequate amounts of oxygen. The actual production of collagen by fibroblasts is also extremely dependent on oxygen availability. As hyperbaric oxygen therapy markedly increases the oxygen available within the blood this in turn enables fibroblasts to produce increased amounts of collagen required for healing of wounds and tissue damage.

Clinical research has demonstrated that a number of days following injury there occurs a migration of fibroblasts (connective tissue cells responsible for collagen production) into the area of damage. These cells then divide and replicate producing large amounts of collagen (connective tissue used to repair damage to tissue) that acts as the building block for the healing of tissue and wounds. The development and migration of fibroblasts is assisted by the influx of oxygen resulting from hyperbaric oxygen therapy, this then supports the development and action of these particular cells which play a vital part in the healing/recovery process.

A decrease in oxygen available to cells such as fibroblasts impairs their action, impacting upon the healing of tissue, causing healing to take longer, and inhibiting the quality of scar tissue developed or rehabilitated, which in turn greatly decreases tissue strength. Healing occurs both faster and stronger in wounds/injuries that are treated with hyperbaric oxygen therapy due to the demands of oxygen availability by the cells and tissues responsible for the healing process being met.

As the oxygen concentration of the blood increases during hyperbaric oxygen therapy, cells further from blood vessels are more adequately oxygenated. Hyperbaric oxygen therapy allows for increased oxygen availability in more extensive areas enabling fibroblasts to carry out their part of the healing process for tissue damage and injury, more rapidly covering larger areas. Hyperbaric oxygen therapy saturates the blood plasma with oxygen, this in turn reaches the areas of damage/injury with greater efficiency than red blood cells, providing all cells and tissues with the much needed agent for healing, oxygen. The cells responsible for the development of scar tissue for healing are then able to carry this out more rapidly and the resulting tissue integrity is stronger.

Injury or damage to tissues also results in damage and destruction of the supporting blood vessel structures. The healing process is reliant on these structures for supply of the blood containing the cells and nutrients that carry out and enable healing as well as the removal of damaged cells, debris and foreign micro-organisms. Research has demonstrated that treatment with hyperbaric oxygen therapy significantly increases the number and actual size of blood vessels in damaged tissues and wounds. This allows the healing process to occur faster speeding the recovery of the injury or wound.

Oxygen perfusion around wounds and damaged tissues is greatly increased when the blood supply to these areas possesses greater than normal levels of oxygen within blood plasma as well as carried on red blood cells. The oxygen contained in the blood plasma is more easily accessible than that carried to the tissues and cells of the wound/damaged area on red blood cells, and this method of oxygen supply is less labour intensive and energy taxing. The cells involved in the healing process are highly dependent on oxygen to carry out their healing function and this increased demand for oxygen in the area around wounds by the increased number of healing cells in that location is met by the increased oxygen saturation of the blood following hyperbaric oxygen therapy.

During the time of injury and damage the microcirculation and the blood vessels of this circulation (capillaries) are vital to the healing process through the supply of nutrients and oxygen and the removal of waste and debris to enable the cells responsible for healing to successfully complete their function. Growth of new, and repair of damaged capillaries are stimulated within the damaged tissues by hyperbaric oxygen therapy, providing increased oxygen availability to these areas. The increased oxygen supply and increased pressure employed by hyperbaric oxygen supply are both responsible for the stimulation of new capillary growth and the repair of existing capillaries.

13. HBOT improves the survival of tissues in the ‘grey area’ of crush injuries

14. HBOT increases production and improves the action of Osteoblasts and Osteoclasts

Osteoblasts are the cells responsible for bone formation and osteoclasts are the cells responsible for bone reabsorption. Both these cells work together to form bones and control the amount of bone tissue. The provision of increased levels of oxygen allows for increased production of these cells and enables them to conduct bone repair and formation more adequately through the reduction of oedema and growth of new blood vessels in the micro-circulation.

When the inflammatory process, swelling and oedema is rectified more rapidly the repair and regeneration of bone is able to commence sooner. With the increase in blood supply and oxygen availability, the tissues and cells responsible for bone regeneration are able to carry out their task of healing more efficiently, resulting in accelerated recovery and a better result in the healing tissues.

Research has demonstrated that having lower oxygen levels in tissues and wounds increases the possibility of infection. Changes in wound and tissue oxygenation impacts greatly upon the wound immune mechanism. Having an improved or increased tissue oxygen supply reduces the incidence of wound infection as the cells responsible for prevention and recovery from infection are dependent on oxygen, therefore additional oxygen benefits the healing process.

Without oxygen or in a hypoxic (shortage of oxygen in the body) environment the function of white blood cells becomes diminished. This in turn provides a significant threat of infection as the bodies immune response is impaired. The increased oxygen supply offered by hyperbaric oxygen therapy assists in bacterial killing through improving leukocyte (type of white blood cell) function.

19. HBOT potentiates the use of antibiotics

Research has demonstrated that periods of hyperoxia (increased oxygen levels in tissues) and hyperbaric oxygen therapy has influenced the activity of some antibiotics, enhancing their effectiveness. This enables the presenting infection to resolve quicker.

Hyperbaric oxygen therapy provides direct bactericidal (substance that kills bacteria) and bacteriostatic (hampers the growth of bacteria) effects against bacteria due to the generation of oxygen free radicals. These free radicals are able to damage the membranes and make up of the bacteria rendering them ineffective or killing them. Anaerobic (without oxygen) organisms find an increased oxygen environment toxic and are unable to survive.

Research has proven that the use of tobacco and smoking causes arterial vasoconstriction (narrowing of the arteries). This leads to numerous health issues as blood flow becomes impaired, affecting the cells and tissues of the body. When the bodies blood flow is impaired as a result of conditions such as arterial vasoconstriction, oxygenation of the cells and tissues is greatly impaired as the oxygen carrying components of the blood (red blood cells) are unable to fulfil the oxygen requirements for cells and tissues. Hyperbaric oxygen therapy increases the oxygen levels within the blood plasma and this element is able to travel to the cells and tissues with greater ease and success providing the much needed oxygen. Smokers’ recovery and complications from surgery can be greatly diminished by the use of hyperbaric oxygen therapy as the cells and tissues continue to have their oxygen requirements met and often exceeded. This enables the healing process to be improved and accelerated.